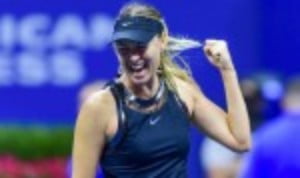 The five-time major winner dropped to her knees after clinching match-point and she was on the brink of tears as she saluted the capacity crowd inside Arthur Ashe Stadium.

It’s seventh consecutive win for the Russian over the world No.2, and she appears capable of contending for the title. “I just thought this was another day, another opportunity and another match, but this was so much more,” said the former champion.

“You never really know what you are going to feel until you win that match-point, and you can’t really control your emotions or what goes through your mind. Everything you go through is so worth it, just for this moment.

“No matter my record against her [Halep], it’s always been tough no matter what tournament we play. I know I always have to work for it, and today was another example.”

It was a high quality duel played in the manner expected. Sharapova attempted to force the issue while Halep tried to soak up pressure hit on the counter-attack. The Russian, who hit an eye-watering 64 unforced-errors, raised her level in the decider and her shotmaking skills proved to be the difference.

Garbine Muguruza showed just why she is the tournament favourite as she dismissed   Varvara Lepchenko 6-0 6-3 in the first round of the US Open.

The big-hitting Spaniard had too much firepower for her lowly ranked American rival and she took just 60 minutes to wrap up an emphatic victory. It’s a sixth straight success for the Wimbledon champion, and she is undoubtedly the player to beat in the city that never sleeps.

Muguruza, who has a surprisingly poor record at the final Grand Slam of the year, said afterwards: “I’m very happy to be in the second round. I think she [Lepchenko] started a little bit nervous and I started very well. The match was more equal in the second set and it was a big fight. I’ve came here so many times but never done very well, so I guess this year I will try my best again.”

Heather Watson’s US Open woes continued as she faltered at the first hurdle once again. It’s a seventh consecutive opening round loss for the Brit in New York and she was noticeably frustrated with her erratic display.

Alize Cornet defeated Watson 6-4 6-4 to claim just her third win since Roland Garros in June. The Frenchwoman secured a break in the first game of the match and that was all she required to move halfway towards the finishing line.

Watson rallied from a break down in the second set on two occasions but she was unable to build momentum. In the ninth game, the Brit dumped a backhand into the net to concede her serve once again – and this time there was no way back.

Venus Williams marked her 19th appearance at the US Open with a 6-3 3-6 6-2 triumph over Grand slam debutant, Viktória Ku_mová. The veteran American had to work hard to oust her impressive teenage opponent.

“It’s been a beautiful 20 years,” beamed the 37-year-old after the match. ‘I love this game and that’s why I’m still here. I’m not sure there will be 20 more, but I’m going to enjoy this year.

“Viktória played amazing and I did not do a lot wrong, she just stepped it up. I’m sure there are a lot of great things ahead for her and I’m sure we will play again.”

”I’ve known her since Juniors and we played against each other in singles and with each other in doubles, so I knew this was going to be a tough one. First rounds are always difficult and you just want to get into the tournament and make it through. I’m pleased I got the job today.”

Petra Kvitova, who reached the quarter-finals two years ago, edged a tight duel with former world No.1, Jelena Jankovic, 7-5 7-5, in breezy conditions.

"It was a little bit tricky because we didn't know where the ball would go,” said the Czech. "We’ve had a few tough battles in the past, so I'm just happy to get through this tricky match.”

Elsewhere on the grounds, Kristyna Pliskova was the first official winner at this year’s US Open. The Czech toppled Misa Eguchi 6-2 6-2 in just 57 minutes and she was soon joined in round two by Caroline Garcia. The talented Frenchwoman dropped just one game as she eased past Tereza Martincová.

Magdaléna Rybáriková enjoyed a dream run to the last four of Wimbledon earlier this summer and she has made the ideal start in the Big Apple. The 28-year-old is safely through after taking out the uncompromising Italian, Camila Giorgi, 6-2 6-4.